on December 09, 2019
Followers of Labour leader Jeremy Corbyn say he is constantly attacked personally because his opponents are scared. "They are scared," they explain, "because they know deep down he is right."

Corbynisticos, as they are called, refer to the many headlines from Conservatives stating "He's not fit to be Prime Minister!", "You're not safe with Jeremy Corbyn," and "Look at his voting record!"

This, they say, is clear indication they are scared.

But defending Corbyn is only half of what Corbyngis have to say, most of the other half are attacks on Jo Swinson, leader of the Liberal Democrats.

When asked why they are attacking Jo Swinson so much, they absolutely refuted that it is because they are scared or that she is in any way right. 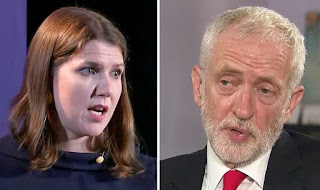 "We're not scared. No, we're not. Really, you have to believe us!" They are just sharing the truths like, "She's not fit to be Prime Minister!", "You're not safe with Jo Swinson," and "Look at her voting record!"

When asked why they don't fire over the heads of Liberal Democrats to hit the Conservatives, one leading Corbynch said it was because "that would require a larger projectile and that would be a tacit approval of trident."